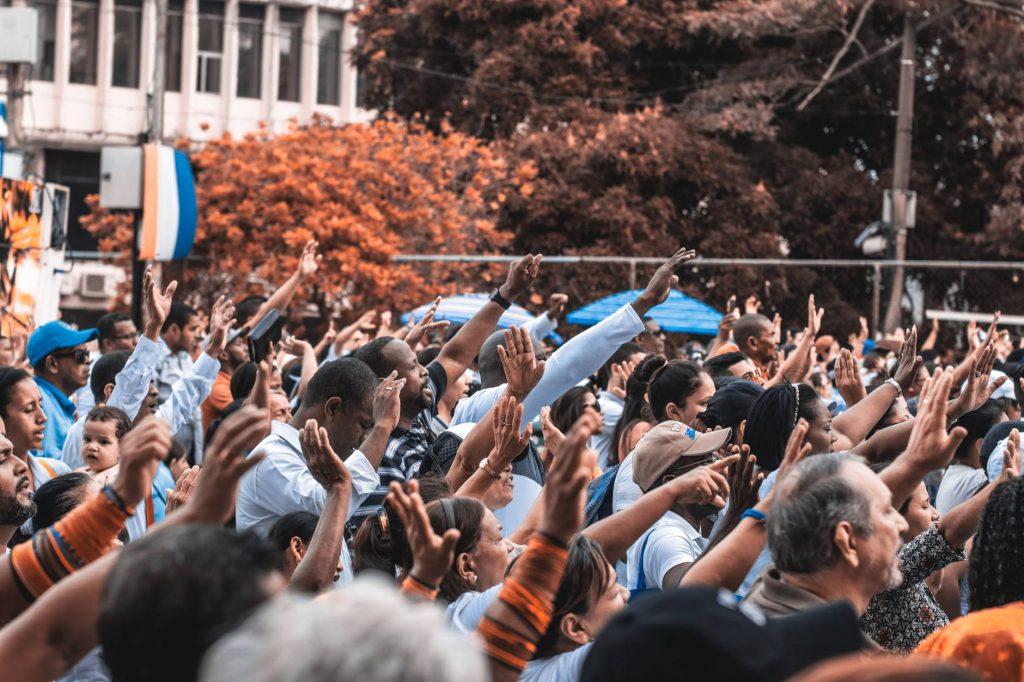 Photo by Luis Quintero on Pexels.com

In the year 2009, few months before I received Christ as my saviour, I had a great visitation in form of a dream. This was sixteen years after the other four dreams about end times, which I have addressed in previous articles. When I experienced this dream, I was a high school teacher in a village school.

In the dream, I was standing outside the small gate to the kitchen of that school, but in place of the kitchen was a large church. There were brethren inside the church at the front pews. They seemed to be holding a fellowship as it was on a weekday. Standing in the air outside the church was Jesus, in a jungle green soldier’s uniform. He was very huge. He was looking at the brethren in the church sternly, the way a parent would look at a child who is doing something wrong. I constantly looked at him, then at the brethren who had no idea that Jesus was there. I wondered how Jesus can come, stand there yet those who are supposed to be meeting him have no idea that he had come. I felt within me that something was wrong.

Under normal circumstances, one would appreciate brethren who meet in
church for prayers or fellowship. I don’t refute that fellowship is
important for it builds believers. Why is then Jesus annoyed with these
people? The answer lies in the great commission given to the church by
Jesus just before he ascended to heaven. It’s always good, if one is
working under some authority, to first understand the mandate one has
been given, before embarking on doing it. This is the problem with the
present church. It is an indoor church 24/7, yet our master Jesus
mandated us to go out into the world and execute his great works; the
great commission described in this scripture:

14
Later He appeared to the eleven as they sat at the table; and He
rebuked their unbelief and hardness of heart, because they did not
believe those who had seen Him after He had risen. 15 And He said to
them, “Go into
all the world and preach the gospel to every creature. 16 He who
believes and is baptized will be saved; but he who does not believe will
be condemned. 17 And these signs will follow those who believe: In My
name they will cast out demons; they will speak with new tongues; 18
they will take up serpents; and if they drink anything deadly, it will
by no means hurt them; they will lay hands on the sick, and they will
recover.”

Jesus wants to find us doing the work he called us to do. No believer
is called to sit just as a member of the church. As soon as one
receives salvation, he or she should sit under a pastor and be
instructed on how to do the work of God that they are called to do, and
at the same time they should be doing it. There is no time to waste
seated. The Holy Spirit gives one simple tasks that they can manage, as
they grow in salvation, to later be entrusted with more complex tasks.

45 “Who then is a faithful and wise servant, whom his master made ruler over his household, to give them food in due season? 46 Blessed is that servant whom his master, when he comes, will find so doing.
47 Assuredly, I say to you that he will make him ruler over all his
goods. 48 But if that evil servant says in his heart, ‘My master is
delaying his coming,’ 49 and begins to beat his fellow servants, and to
eat and drink with the drunkards, 50 the master of that servant will
come on a day when he is not looking for him and at an hour that he is
not aware of, 51 and will cut him in two and appoint him his portion
with the hypocrites. There shall be weeping and gnashing of teeth.

The body of Christ in general is supposed to emphasize on outdoor
evangelism through crusades, interdenominational seminars, workshop,
conferences and even door-to- door evangelism. This will then go a long
way to reach out to the unreached. For any church to grow healthy, it is
required to feed from other churches through these meetings, because no
one single church is gifted with everything. Some are gifted in faith,
others holiness, others in the ministry of uplifting of marriages,
others deliverance etc. and all these are necessary in every church.
That’s why the bible calls it the body of Christ, where one church is an
arm, others legs and so on. It is therefore paramount that the servants
of God: bishops, pastors and the church administration cease from
unhealthy competition with other churches and facilitate their flock to
mix. This is emphasized when Jesus prayed for all believers to be
united.

20 “I do not pray for these alone, but also for those who will believe in Me through their word; 21 that they all may be one,
as You, Father, are in Me, and I in You; that they also may be one in
Us, that the world may believe that You sent Me. 22 And the glory which
You gave Me I have given them, that they may be one just as We are one:
23 I in them, and You in Me; that they may be made perfect in one, and
that the world may know that You have sent Me, and have loved them as
You have loved Me.

The pastor should also ensure that every one of his or her flock is
rightfully positioned and doing God’s work through proper guidance and
love. The office of the prophet is very important in this case as the
Holy Spirit mostly communicates specifically as to how individuals are
called. For example a prophesy can be given that one will become a great
worshipper, a prophet, a pastor, or one will be involved in taking care
of the widows, orphans, the needy and such like. The individual with
the guidance of the pastor should take up such prophecy, pray and align
themselves to serving along that line.

Another problem of today’s church featuring in this dream is the
omission of eschatology (The study of the end times — the end of the
world, the second coming of Christ, the Apocalypse or the Last
Judgment). The believers are ignorant of the fact that Jesus is coming
soon. The reason he features as a soldier in the dream is because Jesus
is coming back as a man of war, to fight and judge the devil, his demons
and the rebellious people. They have also not been taught the signs of
the end times, the issues of antichrist, the false prophet and such
characteristics of the last days that we are living in. That’s why the
Holy Spirit is releasing these revelations so that the church, pastors,
teachers of the Word and prophets, can take up the matter and teach
these things.

During the time of Daniel, the end times were far, and that’s why he was told to seal that prophecy of the end times.

9 And he said, “Go your way, Daniel, for the words are closed up and sealed till the time of the end.

On the other hand, John, in the book of Revelation, was told not to seal the prophesy for the end time was near.

10 And he said to me, “Do not seal the words of the prophecy of this book, for the time is at hand.

Daniel prophesied that during these last days, the Holy Spirit will
cause the upright to understand the times, the happenings and the signs
in relation to the end times prophesy in the scriptures and such people
were required to instruct the others. That’s why Jesus is worried to see
a church that is ignorant of his second coming.

33
And those of the people who understand shall instruct many; yet for
many days they shall fall by sword and flame, by captivity and
plundering.

The Holy Spirit is ardently raising servants who should understand
these things and teach them to the rest. That’s why in the dream I am
able to see Jesus and feel the church should know. Those who get
revelations like these ones should fervently inform the church. Being
near the gate also symbolized my being near entering the kingdom of God,
which I did few months later. When I got born again, the Holy Spirit
reminded me of these revelations and required I tell the church, which I
am still doing. I thank God for this space where I can write these
things so as to reach many more in the world, because the four walls of a
church and the limited time of service may not allow all this
information to be communicated. I therefore urge you my reader that you
relay this information to as many people as possible and God will bless
you.